BMC were delighted to welcome Shane Snow online with the whole team to talk about the concept of “Dream Teams” . We all must make sure we build on our own Dream Teams as we recover from this pandemic. Shane covered the following with us: Cognitive Diversity, What makes successful sales people, Cognitive Friction, Intellectual Humility and Culture Add.

I recently had the pleasure of welcoming Shane Snow to speak to my very own ‘Dream Team’ to talk about both how to maintain what we are doing and also to continue to grow BMC so we are stronger and more efficient than ever before. Shane is an all-round fantastic guy and an acclaimed New York City based award-winning journalist and writer, and the cofounder of the media technology company Contently which made the Inc. 5000 list for four years in a row.

The past few months have presented new challenges and worries for both individuals and businesses alike culminating in what can be described universally as an incredibly difficult and testing time. It goes without saying that I am really proud of how the BMC team have exhibited support, humility and kindness to one another and determination to ‘keep on keeping on’.

It is important, now more than ever, to ensure team cohesion and mutual goals, and to push forward as the economy returns whilst we maintain that ‘Dream Team’! Who better than to talk about teamwork than Shane Snow? Shane contributes regularly to Wired magazine and Fast Company, and has written about innovation for numerous publications, including the New Yorker, the Washington Post, and Advertising Age. His work in technology entrepreneurship has been recognised by the United Nations, the New York Times, Inc., Forbes, Details, and New York City's Economic Development Council.

His new bestselling book ‘Dream Teams’ is a must read as it provocative and entertaining, but it will change the way you think about people, progress and collaboration. Shane reveals the counterintuitive reasons why so many partnerships and groups break down--and why some break through.

So what does Shane say?

Cognitive Diversity
This is a concept around a group of people coming together with different ways of thinking. When you then combine these you are able to adapt as a result. You have likely heard the mantra, ‘two heads are better than one’ however, this is only if they think differently otherwise they are only as good as the smartest one of the two.

Intellectual Humility
Through this notion, it is key to challenge your thought process to the effect that whatever has worked for you in the past might not be the best way to achieve what you want to achieve in the future. Instead opening your mind to different ways of thinking will allow you to evolve.

Cognitive Friction
Cognitive Friction can be defined as ‘“the resistance encountered by human intellect when it engages with a complex system of rules that change as the problem permutes”. When you start to seek out different ways of thinking, even when we think differently, we tend to want to get along and we want to be nice to each other, so we shy aware from the conflict of different ideas, however this reduces our potential. When we invite conflict revolving about ideas, not personal, we can become better as a team.

Culture Add
When adding new members to your team you will automatically think about the cultural fit, and this is defined when employees' beliefs and behaviours are in alignment with their employer's core values and company culture. However, Shane challenges this concept and adds that you should instead look at ‘Culture Add’ and not ‘Culture Fit’. As you grow, scale and add new team members, instead of trying to find people that fit your culture, think about culture add and not culture fit. Think primarily of how people can add to your processes and culture to aid growth.

Thank You from us all at BMC!
We all logged off after Shane’s motivational session feeling extremely energised and we each had some actionable takeaways so we can be the best ‘Dream Team’. Our main takeaways were not to shy away from conflict, but instead to embrace it, and we also learned the importance of constantly challenging each other as a team to drive our business and team forward! 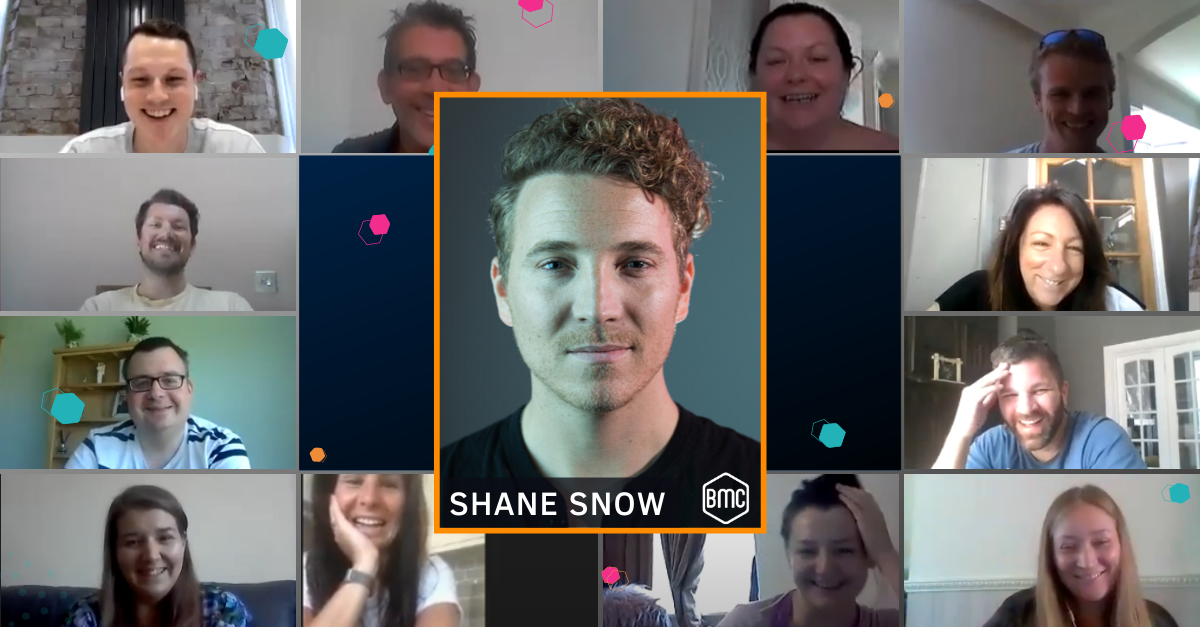